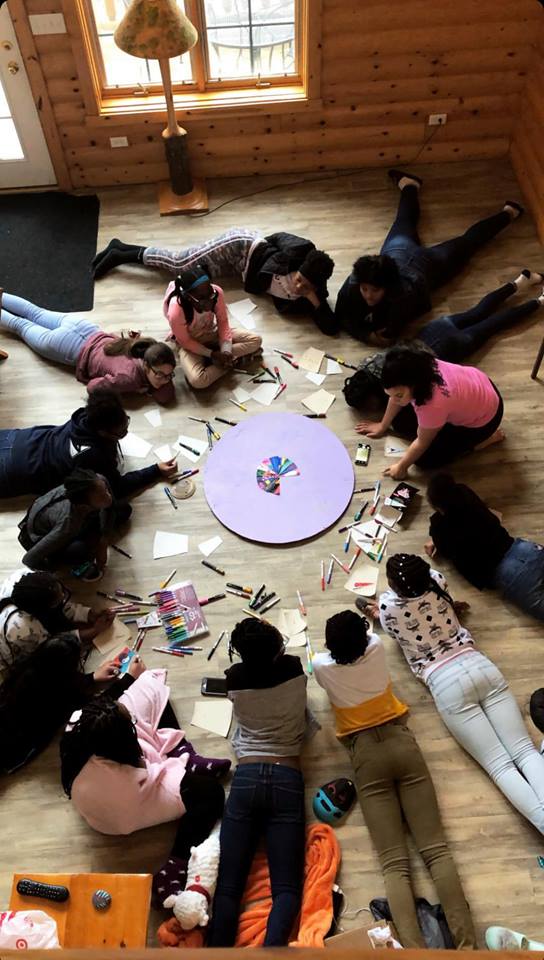 A few days before their Christmas celebrations began, a group of teen girls from Chicago’s Austin neighborhood gathered around a table, sipping hot chocolate and decorating canvases.

The “Paint & Sip” night organized by BUILD, Inc., one of Chicago’s leading gang intervention, violence prevention and youth development organizations, served as a “mixer” to introduce the middle-school girls in its Building Girls 2 Women program before they embarked on their first winter retreat.

The following week, the girls traded the city streets for a rustic, woodland resort 90 miles southwest of their bustling neighborhood. A first for many, the group of 15 girls spent two days at Grizzly Jack’s Grand Bear Resort, where they ice skated, made crafts, built new friendships and engaged in peace circles and fireside chats about identity and self-love.

“The theme for the retreat is ‘This Is Me,’” said Angella Roberts-Smith, an intervention specialist with BUILD and one of the girls’ mentors, prior to their departure. “We want to teach them to be more confident with their identity and to love themselves…and to be respectful of each other’s differences.”

Working in a neighborhood that experienced more than 50 homicides last year, Angella and her colleagues facilitate the youth agency’s Building Girls 2 Women program for local middle-school and high-school girls at the highest risk of experiencing trauma and violence.

“When the [Chicago] mayor’s mentoring program came out a couple years ago, it was very specific to boys,” said Jessica Carrillo-Guerrero, BUILD’s director of community wellness and clinical programs and services. “But what we were finding was that more and more incidents of violence were involving girls. It just looked very different than the ways the boys were involved.”

In the first eight months of 2016, 850 girls ages 17 and under were victims of violent crimes in the city, including homicides, aggravated battery and robberies, according to data from the Chicago Police Department.

Leaders of BUILD, located in the Austin neighborhood, also found its own extensive educational and intervention programming was being accessed by many local girls. However, the focus of the programming didn’t specifically address the ways in which girls were impacted by community issues like gang affiliation; physical, emotional and sexual abuse; and financial exploitation.

“We realized that a lot of the reason the girls were acting up was because they had some underlying trauma that they were dealing with. So, we made a hybrid program – Building Girls 2 Women,” Jessica said.

Launched in 2017, the program offers a robust combination of intensive mentoring from BUILD staff and counseling from trained professional therapists, in addition to community building activities, like the retreat and paint and sip night.

Its mission aligns with that of United Way’s Austin Neighborhood Network, a coalition of community stakeholders in the neighborhood. Agencies, like BUILD, are working toward a common agenda to prepare Austin children for lifelong success through the expansion of access to early learning programs and safe community spaces for families.

“We want to create a space for women to feel safe and [be] themselves,” said Olivia Santiago, a Building Girls 2 Women mentor and BUILD community social worker. “We want to show that violence and trauma is not normal, but also teach them how to navigate this place because they can’t leave it.” 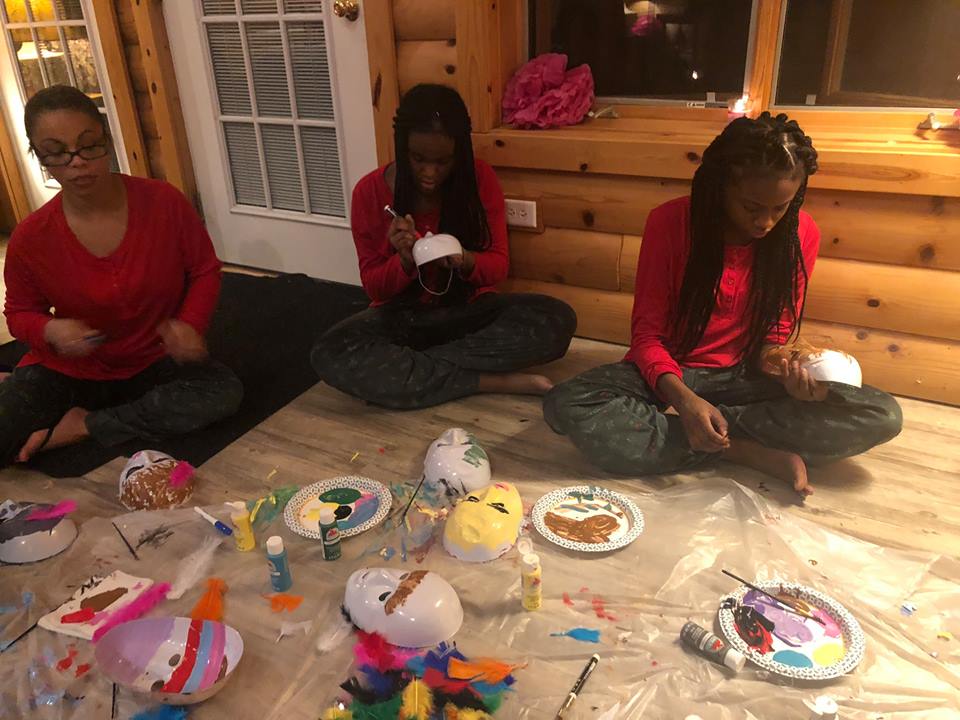 Taking a ‘sisters-only’ approach, Angella and her colleagues not only provide mentorship, they serve as role models who the girls can relate to.

“I was one of them,” Angella said. “I was an outsider and raised by mostly men and hung out with only the boys. I was lost a lot and didn’t have someone to talk to.”

Now, she’s that “someone” for girls maneuvering difficult life situations and a society that often fails to recognize or mitigate the barriers women of color face to living healthy, fulfilling lives.

“On paper, I’m a mentor, but they consider me a big sister,” Angella said.

She and the other mentors also emphasize relationship building, as strong friend and familial supports can help divert girls from unhealthy relationships and behaviors. The retreat, the first of its kind for the middle-school group, was a time for the girls to kindle those bonds.

A few days after returning from their fun-filled trip, a few of the girls reflected on the lessons they’d carry forward.

“I really didn’t realize how important it was to not judge people on how they act because they have other things going on that you may not know about,” said Alexa Hunt, a 13-year-old program participant who lives in the Englewood community. “Also, I learned that it’s pretty cool to talk to new people.”

Her comrade, Janaia Lewis, a 13-year-old who goes to school in East Garfield Park, also learned many of her peers face similar challenges as her and pledged to be less judgmental of them and herself.

“The most important thing I learned is that every situation you through, you don’t have to go through alone,” Janaia said. “[There are] people that have been in your shoes before and it’s okay to talk to them to help you deal with different situations and emotions.”