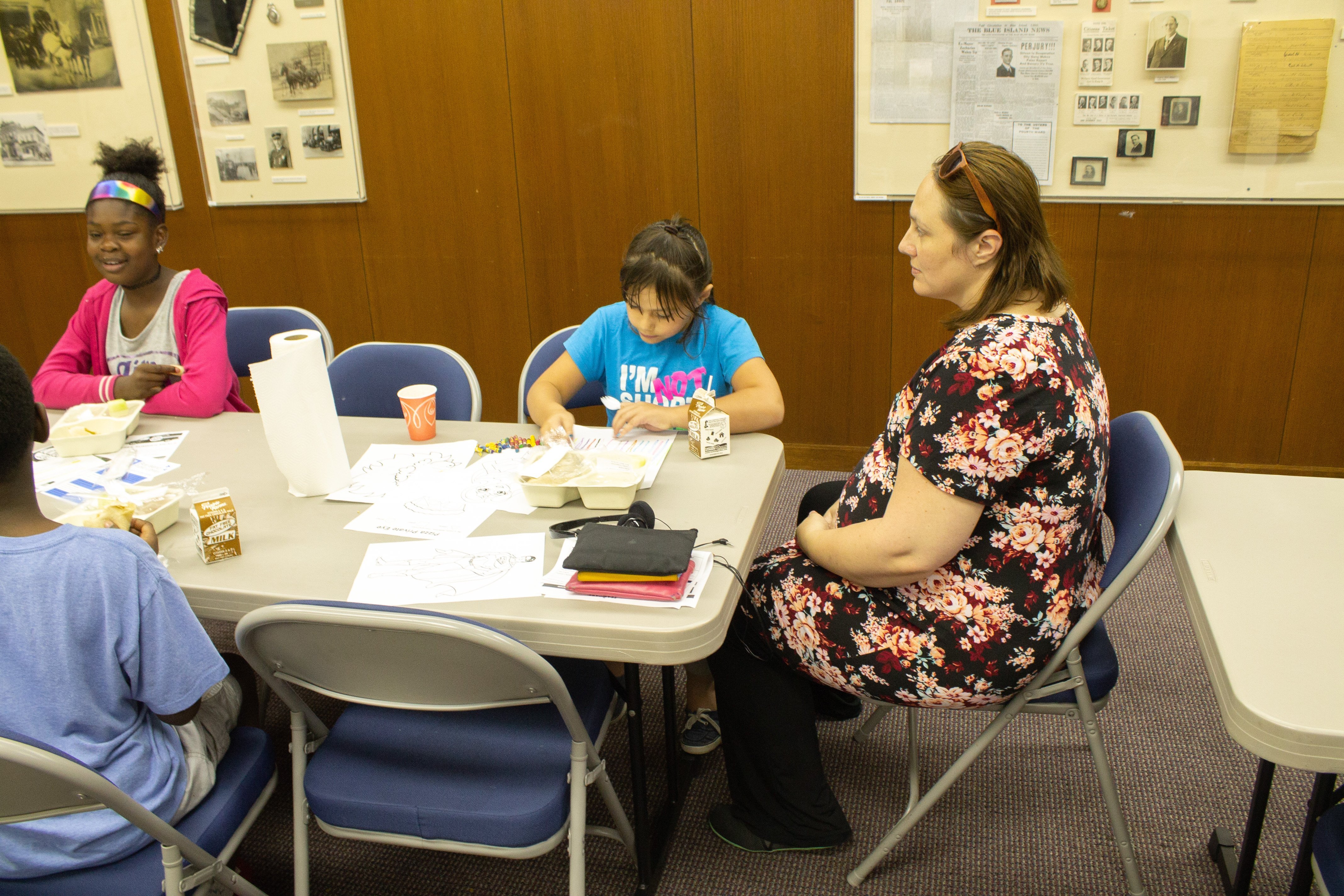 Katherine Guzik and her daughter Alejandra Ramirez-Guzik partaking in the summer meal program. 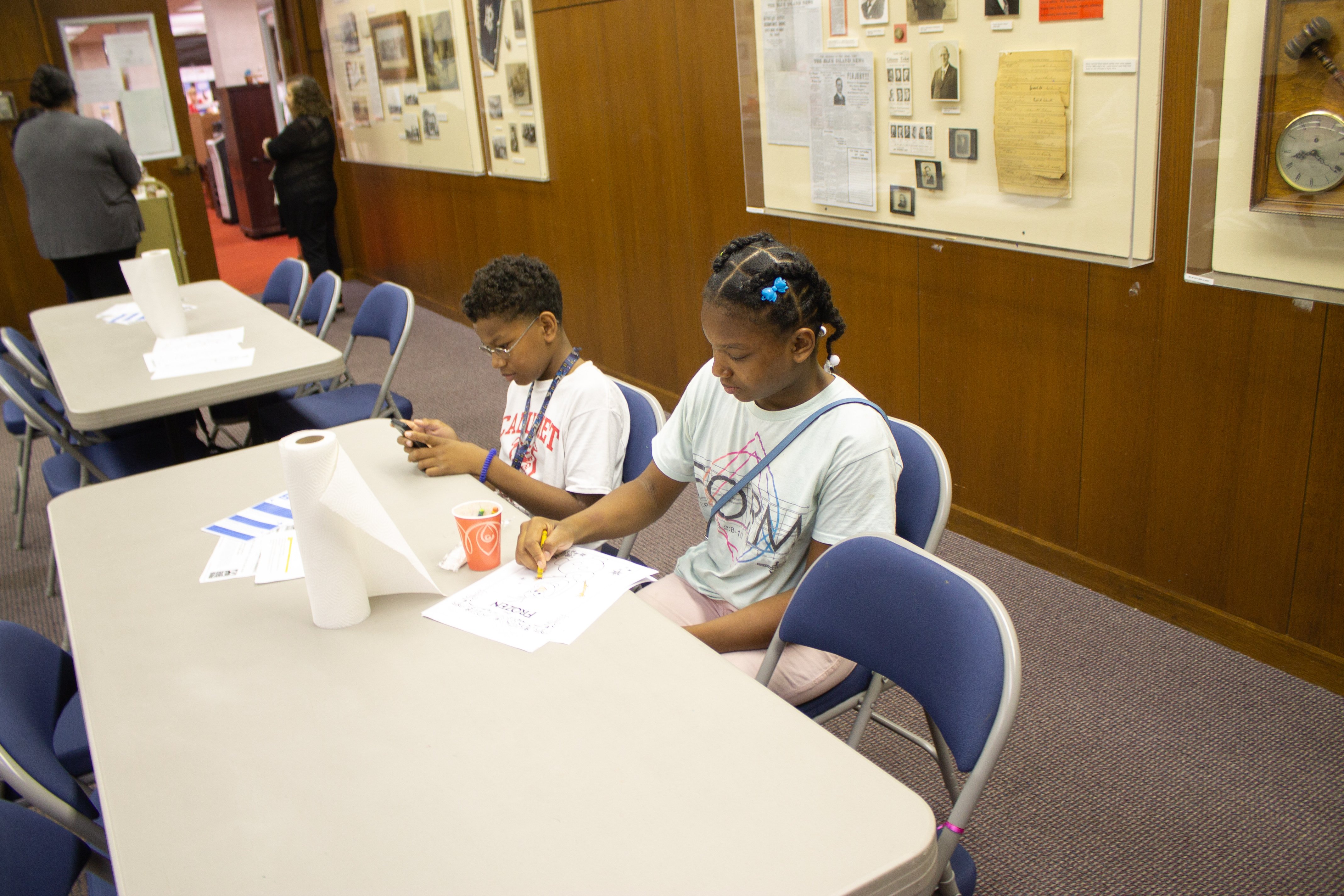 On a hot July day in the south suburb of Blue Island, 16 miles from the Chicago Loop, a dozen local kids and their families trickled into the town’s quiet community library. They weren’t simply there to feed their minds with stories, but to fill their stomachs at the library’s summer lunch program.

The program, in its second year, seeks to tackle food insecurity in the community, a problem that swells in the summer months when youth don’t have access to school meals.

Kaity O’Neal, a mother of seven, learned about the program when she started working at the library. She often brings two of her kids, Kaiah, 13, and Elisha, 7, with her to work and they utilize the meal program during the summer break. “They just absolutely love it here,” Katherine said.

Kaiah and Elisha enjoy the snacks, but they especially love the people and activities. “I meet new friends every day and I like to read Origami books,” said Kaiah.

In the 2018 season the Blue Island Library meal program was expanded to a full week of service, and in its first 20 days has served more than 300 kids. In comparison, it served it 186 meals during last year’s 8-week stint when meals were only offered two days a week.

“Blue Island and Robbins [don’t] have a major grocery store. They got rid of it maybe six years ago,” said Ashley Palomo, a United Way-AmeriCorps member, of the region’s status as a “food desert.” To address this dilemma, the program, which is one of dozens of city Summer Food Service Programs supported by the U.S. Department of Agriculture, offers free lunches Monday through Friday to children of all ages.

With the help of Ashley and her fellow AmeriCorps member, Kassandra Esparza, the program’s expansion has helped to advance the Blue Island-Robbins Neighborhood Network’s goal to become a physically healthy community.

The Neighborhood Network, a coalition of social service providers who partner with United Way to improve the communities of Blue Island and Robbins, aims to reduce food insecurity for 15 percent of families served by the network by 2027.

On this day, a handful of kids came specifically to the Blue Island Library for the meal program, while others were visiting and stopped in out of curiosity. Gathered at tables in a wood-paneled room filled with local historical artifacts, the kids ate their lunch of chicken Caesar wraps, honeydew, cherry tomatoes and chocolate milk.

Along with their meal, they colored, listened to music and read books, which offered a welcoming break from the humidity outdoors and a chance for their parents to scour the bookshelves upstairs.

A mother of five with a baby on the way, Katherine Guzik, learned about the program while walking through the library that day. It was her first visit, and her 8-year-old Alejandra Ramirez-Guzik was hungry for an early afternoon snack between her mother’s errands.

Like a lot of the parents in the community, Katherine was delighted to learn about the program’s goal to connect kids to meals. “It’s definitely something in the area that’s helpful. If you’ve been to other libraries, a lot of people sit around because they have nowhere else to go,” Katherine said. “It’s important to fill their stomachs.”