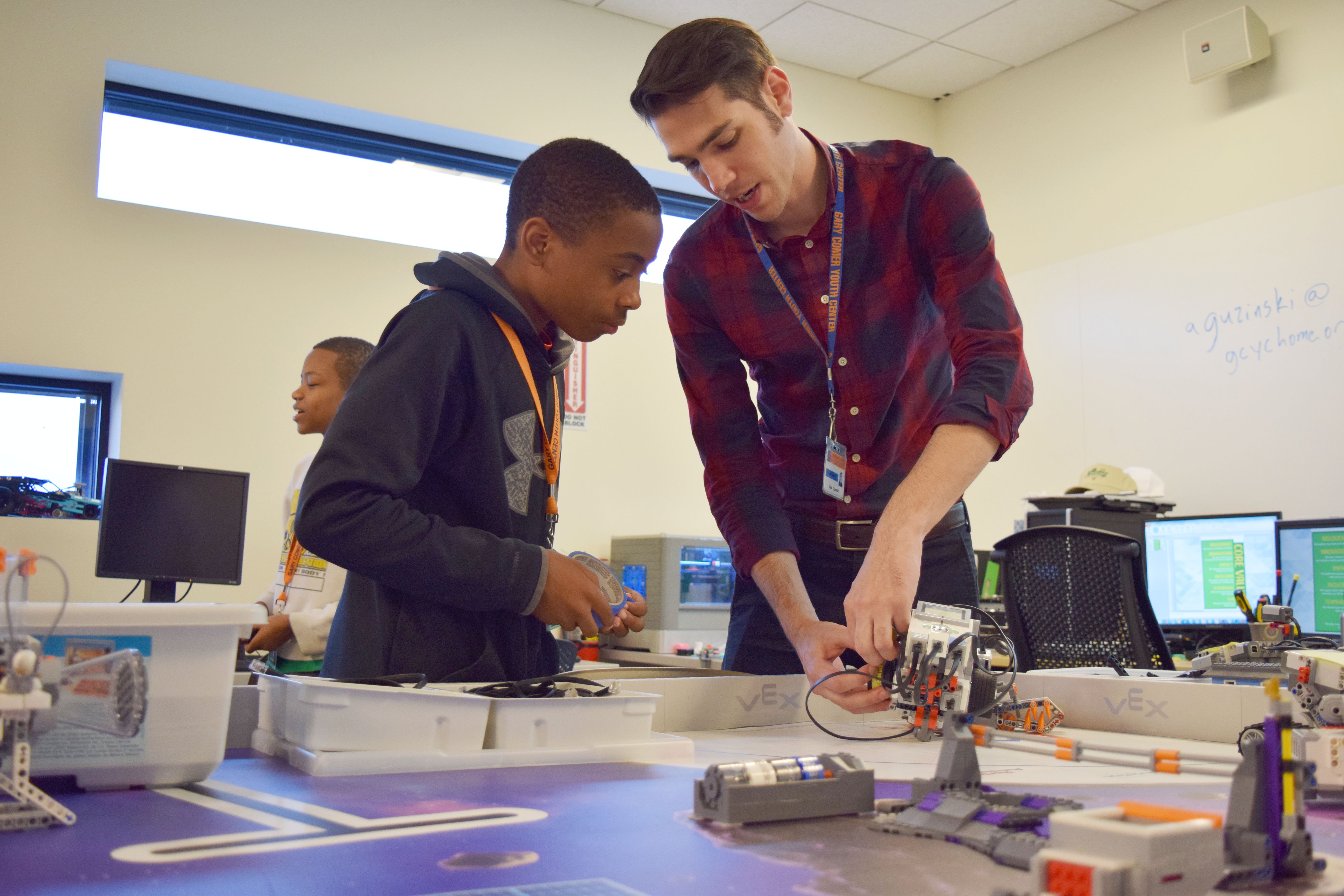 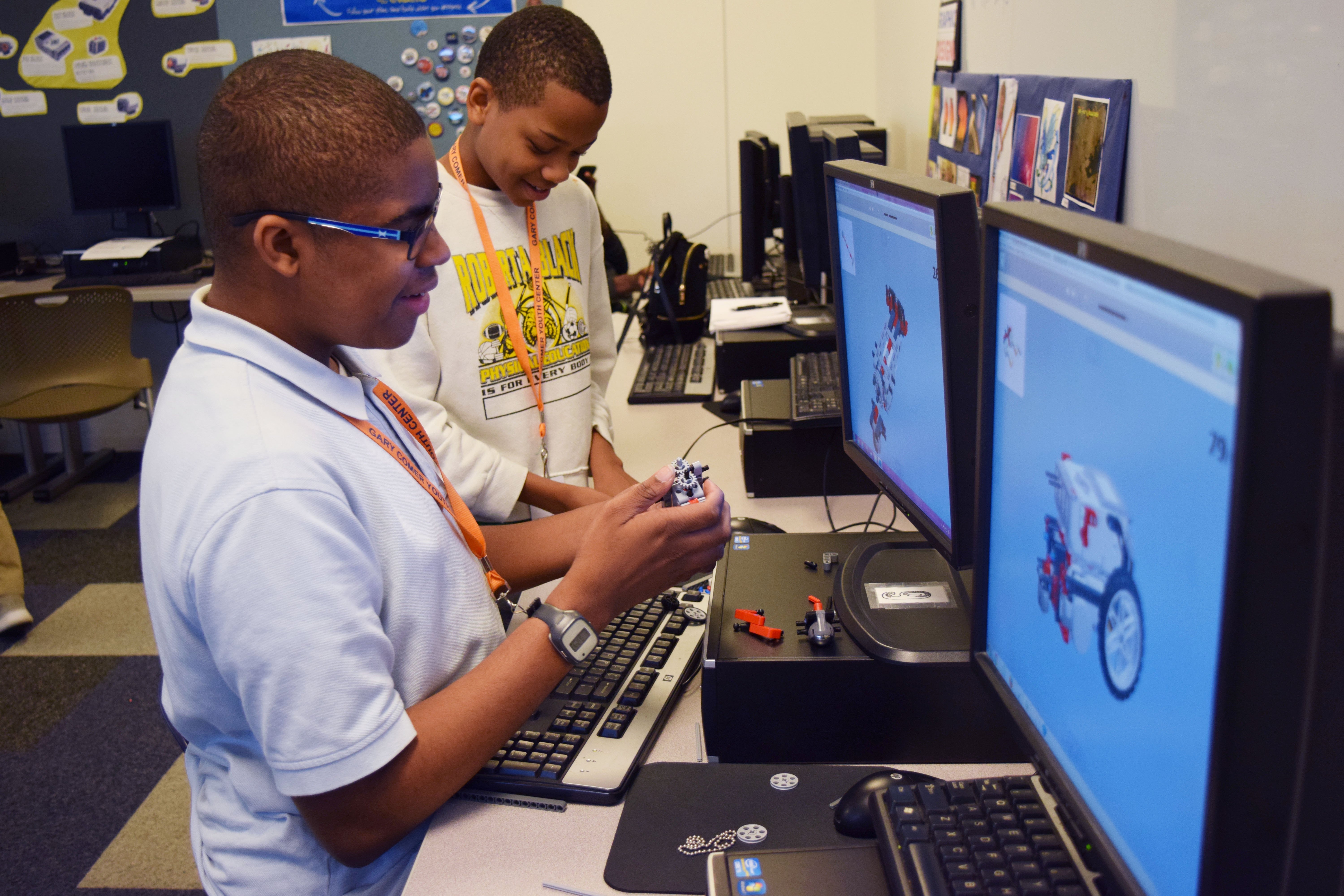 Ajani Clanton researched other designs to get inspiration for his team's robot.

“Mr. G — I figured it out!” Courey Harris shouted, as a small Lego car sped along a table scattered with colorful block structures.

Courey, a 7th grader at Charles P. Caldwell Middle School, is one of about 15 students who meet twice a week after school to build and program robots in the computer lab of Gary Comer Youth Center, a United Way community partner in Greater Grand Crossing. There, the group of fifth through eighth graders from the South Side Chicago neighborhood learn the building blocks of academic success — critical thinking and problem-solving skills.

On that Monday afternoon, Courey was determined to program his robot car to drive forward and lift its arm attachment. Using a desktop computer program, he created a sequence of motions to download to the robot’s computer.

Upon further inspection of Courey’s car, Mr. Alex Guzinski, the center’s technology coordinator, sent him back to the drawing board to tweak his programming. “You’re so close!” Mr. Guzinski said, encouraging Courey.

Opened in 2006, Gary Comer Youth Center stands as a pillar in the South Side Chicago communities of Auburn Gresham, Greater Grand Crossing and South Shore. Nearly 450 students from local middle and high schools participate in classes after school every day until 6 p.m.

Activities ranging from culinary and visual arts to civics classes and sports programs expose youth to a range of new skills and opportunities, while providing a safe space for students to congregate until their parents finish the work day.

Like Gary Comer Youth Center, we at United Way prioritize local students’ academic success. We believe every young person in every neighborhood should have access to high-quality middle school programs and after-school enrichment opportunities. By helping children build a strong foundation in education, we can ensure that kids have the skills to be successful in school and in life.

For Mr. Guzinski’s students, the lessons taught in robotics club aim to do just that. Their lessons in teamwork and problem-solving can be utilized in the students’ everyday lives and will serve as a springboard for their future success in the fields of science, technology, engineering and math.

“[The program] gives them an inside look and head start into actual STEM-based careers,” Mr. Guzinski said. “They’re doing a lot of engineering and coding, but also a lot of research. And they’re following the engineering process, which can be applicable to other kinds of fields, as well.”

Mr. Guzinski’s mentorship in the robotics program is preparing Nathan for his future career in video-game design, while providing him with a fun environment to learn.

“I really like the atmosphere here. Even though we act silly, we get work done,” Nathan said.

While Nathan plugged away at his coding his game, Courey, still determined to make his robot move forward and lift its arm, sat across the room brainstorming how to correct his robot’s programming.

“Why is it turning?” he groaned loudly after another failed attempt. “I gotta figure it out!”

On his sixth try, he returned to the mission table with a grin. “Look! I did it, Mr. G. Look!” he exclaimed as the robot’s wheels squealed forward and its arm raised.