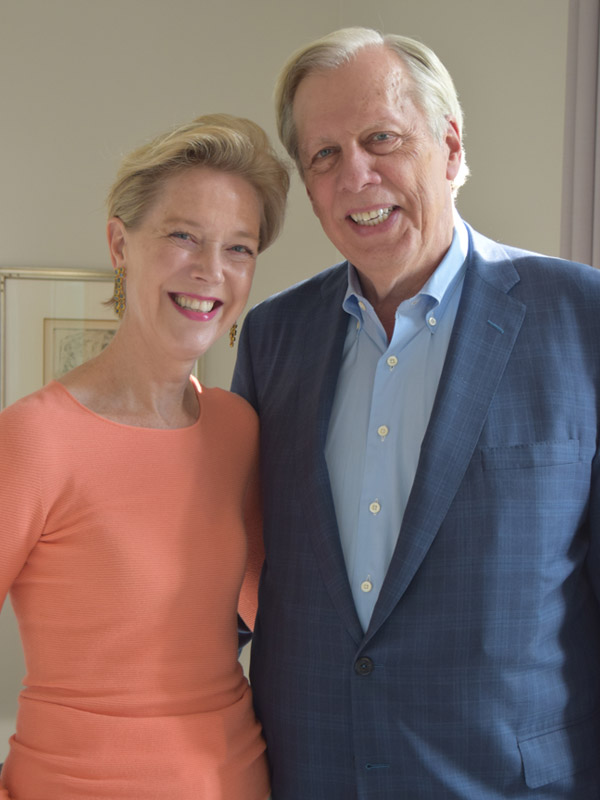 For Clyde McGregor and LeAnn Pope, United Way has been a longstanding part of their story, both as donors and as a couple. The two were introduced by a mutual friend at church in Winnetka, but Clyde jokes that it was because he knew Janet Froetscher, former CEO of United Way of Metro Chicago, that LeAnn agreed to date him.

Although he’s now been a Tocqueville donor for almost 25 years, Clyde’s first introduction to United Way was through Northern Trust’s annual fundraising campaign. Admittedly, he didn’t deeply understand the organization’s mission at the time, but he trusted that his contribution, no matter how small, was making a difference in the community. In 1981, when he accepted a position at Harris Associates, an investment counseling firm that only had about 30 employees at the time, they were looking for ways to give back to Chicago and decided to start a United Way workplace campaign. At Harris Associates, Clyde became a campaign leader and even did some additional volunteering in his spare time.

During a visit to one of the United Way partner agencies, the staff shared how their efforts to reduce recidivism by connecting young men leaving the prison system to living wage jobs was having a significant impact on the community. However, they noted, their ability to do the work was reliant on United Way donor support.

Clyde was inspired by their mission and recognized then that United Way played a crucial role in helping to connect the dots. “It’s hard to find our way into contributing to such organizations – we just don’t know of them,” said Clyde of himself and his peers. “But United Way knows of them, and this work deserves our support.”

It was through his United Way service that Clyde met Janet Froetscher, who coincidently, is LeAnn’s best friend. LeAnn knew about United Way through Janet, and once she and Clyde were married they both became committed and loyal donors.

However, LeAnn’s passion for the mission of United Way really began to grow more recently.

A litigation lawyer in Chicago for 32 years, LeAnn retired in 2015 and began seminary at Garrett-Evangelical Theological Seminary. Deeply disturbed by the pronounced racial divide in the country after the events in Ferguson and Baltimore, LeAnn intended to work toward racial reconciliation, but as she began to work with a nonprofit on Chicago’s South Side whose mission is to effect transformational change in the culture of gun violence in Chicago, her eyes were opened to the legacy of systemic racism in Chicago and nationally.

LeAnn began researching why economically impoverished neighborhoods in Chicago are also predominantly black and quickly learned “the real American history they don’t teach you in school.” She felt an important way to effect change and ensure that zip code does not determine opportunities was through community investment.

“Working beside and behind the community – not in front of them – makes a huge difference. Especially today.”

Over lunch with the United Way fundraising team, LeAnn learned more about the Neighborhood Networks, which she sees as a gamechanger. “When they told me about United Way’s neighborhood initiative, and how it works, I really started listening,” LeAnn said. “I met Darnell Shields [the Executive Director of Austin Coming Together] and saw the community quarterback model in action. Working beside and behind the community – not in front of them – makes a huge difference. Especially today.”

Now more than ever, Clyde and LeAnn say that folks are asking what they can do to address racial inequity in Chicago. The first step for white folks, they say, is to educate yourself about systemic racism, white privilege and talk about it. LeAnn feels so passionately about the need for increased awareness of white privilege that she wrote her master thesis at Garrett on the study of whiteness. She often shares her paper with friends and colleagues as a starting point for necessary, but difficult conversations.

The next step, they both agree, is to invest in neighborhoods, and the best way to do that is through United Way.

“We are in the midst of a racial reckoning in our country since the murder of George Floyd and white folks like us can no longer turn a blind eye to the inequities in job opportunities, healthcare and wealth. United Way is tackling those issues head on through the neighborhood initiatives,” LeAnn said. “I’m grateful for the opportunity to see and be part of an organization that truly takes seriously the disparity and the inequity between the North and South sides of Chicago.”

Clyde and LeAnn’s philanthropic passions include education, local homelessness, hunger and poverty, as well as global poverty though Opportunity International, where LeAnn is currently Board Chair. But when it comes to local community investment, they say they are committed to United Way’s neighborhood work.

“We think what you’re trying to do here in Chicago is necessary and we want to help fund that important work,” Clyde said.

Their story dovetails, and LeAnn admits that she wouldn’t have really gotten to know about the impact of United Way’s work today had it not been for Clyde’s involvement. But she’s grateful that she did.

“When I see the work that is done through United Way and the communities, that gives me hope,” LeAnn says.

Join our committed network of donors when you make a gift to United Way!