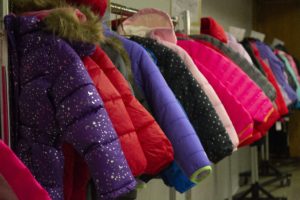 As Christmas music played and families mingled, Dayari Landa sifted through a table filled with children’s books, searching for the perfect read. The 9-year-old girl passed over Dr. Seuss and Shel Silverstein offerings and, with a look of delight, picked up two coding books for girls.

“This is great! I just joined Girls Who Can Code this year,” she said excitedly, before turning to the toy table, where she found a science kit to place under her Christmas tree.

An annual holiday resource fair, United for the Holidays provides 100 families, like Dayari’s, from one of United Way of Metro Chicago’s Neighborhood Networks with winter gear, holiday gifts, health and household resources, and more. This year’s event, held on Wednesday night, benefited families in Evanston.

“You have a bunch of kids who are excited to be here. As a parent, it’s so cool to get to see kids find their toys, mittens, and hats — all the things we sometimes take for granted, but brighten a kid’s life,” said Sean Garrett, president and CEO of United Way of Metro Chicago. “It’s important for United Way to be doing this work because it allows the community to see us as a partner and to help these families have a better holiday and a little brightness in what could be a difficult time,” he added.

For this year’s United for the Holidays fair, we partnered with Evanston Cradle to Career, the lead agency in the Evanston Neighborhood Network that’s focused on building a strong future for local youth. Our partners at Family Focus hosted the event, which spread through the building’s gymnasium and classrooms. 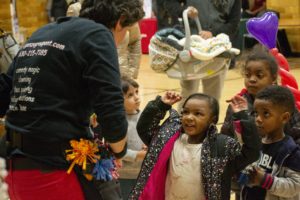 During the festive evening, families received coats and winter accessories, toys, books and school supplies, as well as Christmas trees from Santa’s Best. In addition, parents were connected to information about employment opportunities through our Access United program, as well as ComEd and Comcast resources to help reduce their utility costs.

Most of the kids could be found making slime in the craft room courtesy of BLICK Art Materials or getting a fresh haircut from Chop Chop Mobile.

The night also featured surprise visits from Staley Da Bear, the Chicago Bears’ mascot, and Matt Forte, a former Chicago Bears running back. Matt, a new United Way of Metro Chicago ambassador, provided thousands of t-shirts and sweatshirts to the families, as well as additional hats, gloves and winter wear.

For Victoria Mugabi, a university student and mother from Evanston, the holiday fair was a “fun and thoughtful” way to support families.

“As a single mom, I can’t afford to buy stuff like this for my child. It’s a privilege for us to pick out these things. And for me, it’s a blessing,” she said as she corralled her 5-year-old daughter with a big, red sack full of goodies in hand. 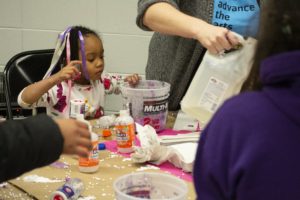 When considering communities in need around the Chicago region, Evanston, a city of 75,000 residents just north of the Chicago city line, is often overlooked. However, there’s a strong dichotomy between the affluent and working-class communities of Evanston. Through United for the Holidays, we and our partners strive to bring some holiday fun and financial relief to the latter.

“People have a strong feeling that Evanston doesn’t have any need, and actually it has a profound need. We have a significant population of homeless families and so many that are living well below the poverty line,” said Sheila Merry, executive director of Evanston Cradle to Career. “Because we’re not a community where people perceive that, it’s often hard to get resources into the community.”

Sheila views the holiday resource fair as a way to show families that someone in the community is looking out for them, especially during the celebratory season.

“I think [the resource fair] is such a statement of our value of the community,” she added. “That’s really the sense of what I feel about this. [We’re] respecting our families and committed to telling them that they’re valued and they matter.”

United for the Holiday 2018

Prepping for A New Career & Future

Prepping for A New Career & Future