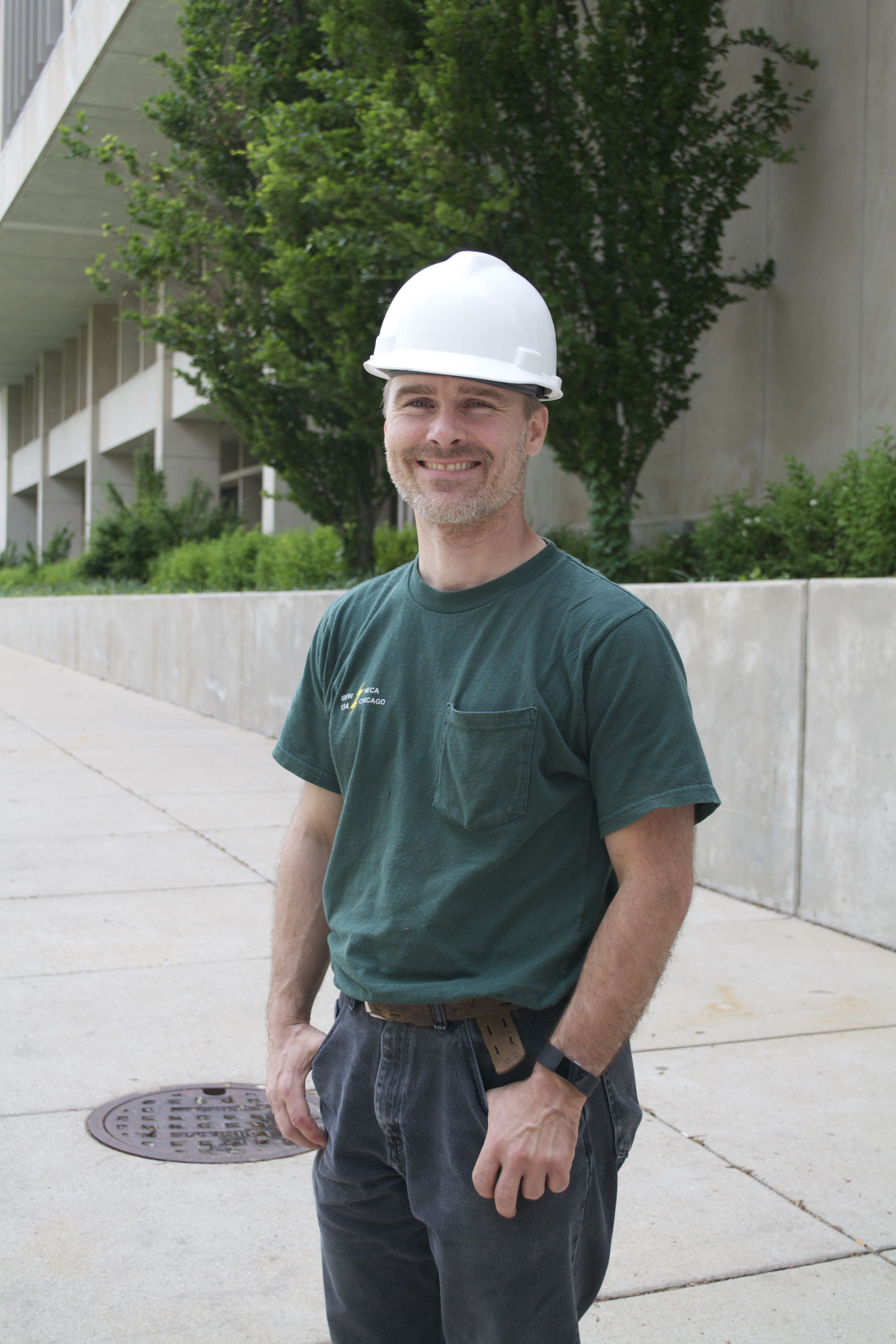 A veteran of the Air Force reserves, Christopher Urban has a non-traditional employment history. Despite studying computer information systems and earning an associates degree through City Colleges of Chicago, he knew sitting behind a desk all day was not the right fit for him. After working a number of different jobs, Christopher decided to attend machining school. However, combined with his job at a pizza parlor, he quickly found himself working 65+ hours a week and making very little.

One of the instructors at the machining school heard about Christopher’s challenges and connected him with the Jane Addams Resource Corporation (JARC), a United Way funded partner agency, where he learned about Access United. A partnership between United Way, Chicago Federation of Labor (CFL), the Construction Industry Service Corporation (CISCO) and the Chicago Building Trades Council, Access United helps to connect Chicago-area residents with union trade apprenticeships, removing or reducing barriers for those who are interested in these careers.

For Christopher, this was the open door he was looking for. “I was just making ends meet with my pizza parlor job,” he explained. “The hours weren’t reliable and I was kind of struggling along the way.”

With the help of Access United, Christopher was able to identify current apprenticeship program openings, navigate the process of applying, and gain the tools – both tangible and instructional – that he needed to begin his career as a journeyman electrician. After five Saturdays of day-long trainings and orientations, he was ready to go to work as an electrical trainee.

Today, just a few short months since the process began, Christopher is a trainee with the International Brotherhood of Electrical Workers (IBEW) Local 134. He’s currently assigned to Control Electricians shop and is working on the University of Chicago campus where he’s learning what it takes to succeed as an electrical worker.

“Everybody has to start somewhere, but you can’t be where you want to be one day unless you start…you just have to start,” Christopher said, “And a lot of times you have to start from the ground up.”

And he’s off to a running start. Access United helped provide the funding for his boots, work tools and fees required to start the program. In September, Christopher will take the next step by joining the Saturday jumpstart program at IBEW-NECA technical school that assists trainees with apprenticeship test prep, with the intention of taking the entry test in January.

Once he’s in the apprenticeship program, Christopher hopes to take the additional classes necessary to earn an associates degree as an electrical worker. He also excited to learn that, with the union’s help, there are additional opportunities to turn that associates degree into a bachelor’s degree after a few years on the job.

When asked about his future, Christopher says he hopes to be a member of IBEW Local 134 within the next 9-12 months, would like to continuously learn about the trade and hopes to own a condominium and a dog in a few years. But he shares that the process of going from a very structured military life to a civilian life was not an easy transition.

“We shouldn’t be losing generations of people during those transitional periods, but it is difficult, it really is difficult,” he shares. “I think that it’s really important for veterans or those with a criminal background record to consider the trades as a viable option for making a living.”

It’s not easy work, but Christopher finds enjoyment from it, and he believes that, with the right work ethic, others can too. “Every life is worth living and you need to take that at far as you can to make that happen for yourself, because no one is ultimately gonna make it happen for you.” 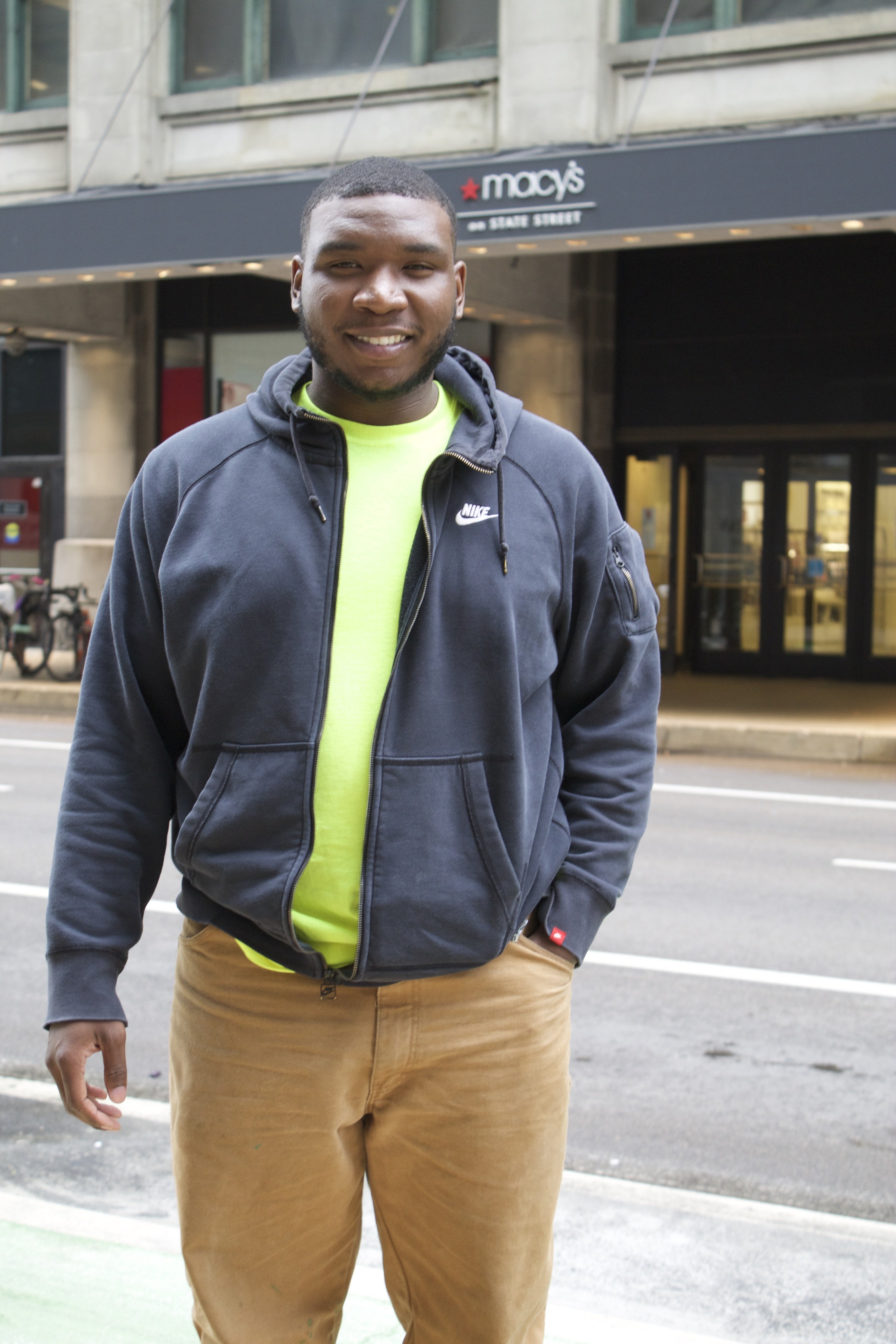 That’s a work ethic that Dionte George shares. Born and raised on the Southeast side of Chicago, Dionte is an electrician trainee with IBEW 134, currently with RJL, one of the electrical shops working on the Macy’s department store redevelopment project.

Before joining the training program, Dionte was working in manufacturing as a machine operator. He was saving up because he knew he wanted to go into a trade. “I want to work with my hands – I knew that off the bat – and that’s what I was shooting for,” Dionte said.

But then some unexpected circumstances threatened to put that goal on hold. That’s when Dionte found out about Access United at United for the Holidays, a family resource fair in the community of South Chicago.

He took an application, filled it out and promptly submitted it with the email subject line “Ready to Work.” Dionte was connected to Access United labor liaison, Mike Hartge, who helped him navigate the process and get connected to some financial resources to help cover costs. “It was almost like, you know, he was my friend picking up. There was no long wait. I didn’t have to send out an email and wait a week or a few days – it was like bam, bam bam,” Dionte remembers.

Mike was there to help Dionte navigate the process, but is quick to point out that determination is the number one factor to success in the trades, and Dionte’s drive was the true difference maker.

The orientation and training process was not easy, but at the end of the five weeks Dionte was connected to a contractor who put him to work. As a part of a smaller shop, he’s been able to gain more hands-on experience than he expected, and he’s enjoying the opportunity to work closely with and learn from experienced journeyman.

Dionte is currently preparing to join the Jump Start program to help prepare for the apprenticeship exam and is considering the future educational opportunities, both associate and bachelor degrees, that a career as an electrician could afford him.

When he thinks about three to five years from now, Dionte says, “I find myself working hard still and finishing out my apprenticeship, on my way to being a journeyman, making moves toward real estate.” He and his father, a union carpenter, are currently discussing joining forces on a few renovation projects once Dionte is finished with his training.

Dionte says that his career in the trades has opened up a world of new possibilities. If he had not filled out that Access United application he likely would still be in manufacturing, continuing to save for the labor union program. “I had saved, but actually some things had occurred and if [Access United] didn’t come in, it would’ve been kinda a bit of a mess. It was almost like a safety net with you guys,” Dionte adds.“I’m appreciative.”

After completing the apprenticeship program, IBEW Local 134 journeymen earn more than $47 per hour. Thanks to their hardwork and determination, both Christopher and Dionte are among those on their way to making living wages with a career in the trades and now have a new wealth of opportunities available to them.

More than 200 Chicago-area residents have attended an Access United information session to learn more about employment in 15+ union trades. If you’d like to get connected to trade work, email accessunited@LIVEUNITEDchicago.org.