ITW’s legacy began with a magazine ad. Chicago financer Byron L. Smith was interested in investing in a manufacturing business in the early 1910s and ran an ad in The Economist. A small group of tool inventors responded, and Illinois Tool Works (ITW) was born.

More than a century later, ITW is a global, diversified, multi-industrial manufacturing leader with a decentralized, entrepreneurial culture. Their business model is successful. But their success is also rooted in community—and in advancing real, positive change. For more than 70 years, ITW has joined United Way as a global corporate partner, investing in communities from the inside out. They have consistently ranked among United Way of Metro Chicago’s top 10 corporate partners, and the majority of ITW employees give annually to United Way, contributing more than $100 million nationally over the life of their partnership.

Today, ITW is taking its commitment to community a step further. It’s investing in entire neighborhoods. Announced at our Stronger Neighborhoods Awards Luncheon on June 2, 2022, ITW is joining United Way to launch the Commit to a Neighborhood Initiative in the Austin and Belmont Cragin communities.

“All of us at ITW feel very fortunate to be part of a company where a deep commitment to give back to the communities where our people live and work has been embedded in the fabric of the culture of the company going all the way to our founding 110 years ago,” said Scott Santi, chairman and chief executive officer of ITW, during his remarks at our 2022 Stronger Neighborhoods Awards Luncheon, where ITW received the Corporate Leadership Award.

“At ITW, we give back to the communities where we live and work,” said Katie O’Brien-Jensen, director of operations for community affairs at ITW. “United Way is the vehicle for us that allows us to really get into the places where our people live and work.”

As part of its “Do More” agenda, ITW is committed to supporting more inclusive economic growth and opportunities in disinvested communities. Commit to a Neighborhood will do just that, creating quality, living-wage jobs with good benefits and stimulating economic development in Belmont Cragin and Austin, where United Way has an established Neighborhood Network. ITW will partner with United Way and on-the-ground nonprofit partners to provide workforce development for industry-specific jobs currently available to residents in Austin and Belmont Cragin. 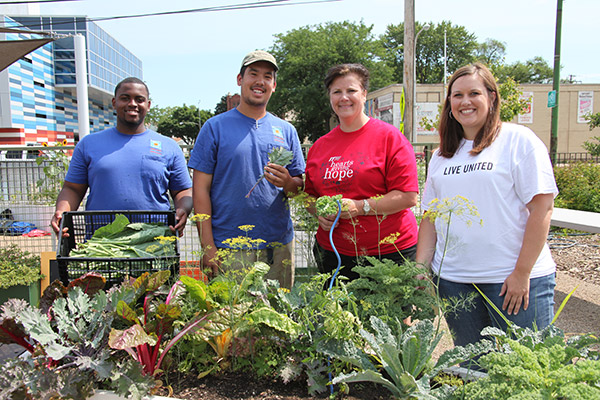 “The Commit to a Neighborhood Initiative gives ITW the opportunity to be a catalyst for economic development and economic inclusiveness here in the Chicago region,” said Kenneth Escoe, executive vice president of specialty products for ITW. “That’s an opportunity that we think very well aligns with the United Way Neighborhood Network Initiative as well as our ‘Do More’ agenda, which is really opportunities for us to find ways to do more to bring about a more equitable and fair society.”

ITW already has roots in Belmont Cragin, where they sponsor the ITW David Speer Academy in memory of former ITW chairman & CEO, David Speer, who passed away in 2012. The Chicago high school offers a world-class STEM education to over 1,000 students in grades 9 through 12. ITW employees are actively involved in the school’s programs and regularly engage with its many talented students.

“This is an opportunity for us to be deliberate about our ability to engage in something that is sustainable and is going to be significant in transforming communities of need,” Escoe said. “To lean into a particular neighborhood that we know, Belmont Cragin, for us to deepen the relationship and to spread that engagement to a community like Austin that certainly has been underinvested for decades.” 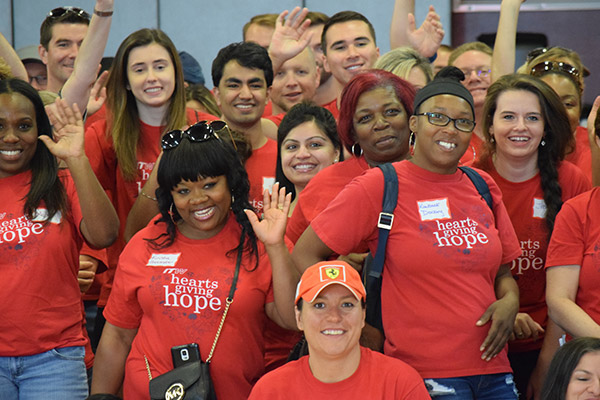 “The number one thing is that we’re making a long-term commitment. It starts with a commitment that isn’t bound, a commitment to do something that is sustainable beyond just the philanthropic donation,” Escoe continued. “This is a targeted way to go into a neighborhood and amplify all the great community development organizations, folks that are working on the ground in workforce development, to prepare the residents for jobs and a thriving environment.”

Commit to a Neighborhood is a true partnership, a coming together of resources and expertise between the ITW team and community partners, like Cara, West Side Forward, Manufacturing Renaissance, Jane Addams Resource Corporation, and Austin Coming Together—our lead agency partner in the Austin Neighborhood Network. Together, this partnership with public, private, and nonprofit leaders will create jobs, workforce training, economic growth, and wealth for all our neighbors in Austin.

“Through skills-based volunteerism, we have thousands of committed employees here in the region who are passionate about giving back to the community,” Escoe said. “They are also extremely skilled in areas like sales, marketing, accounting, finance, human resources, operations, and engineering. Think about the power of those professionals being able to support and help those in the Austin community to be able to bring about that economic prosperity that we’re talking about.” 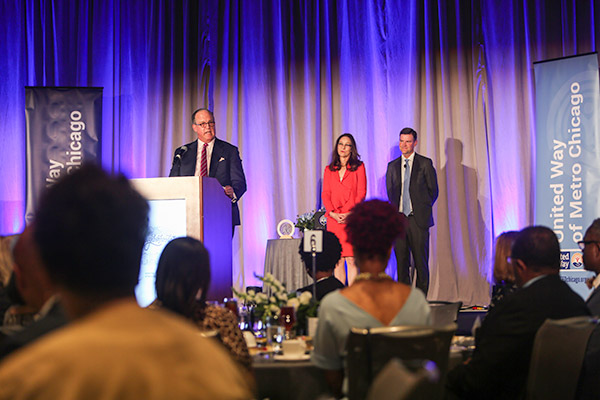 This is why we were proud to present ITW with the 2022 Corporate Leadership Award at our Stronger Neighborhoods Awards Luncheon earlier this month. ITW truly embodies equity in action, joining United Way for our decades-long partnership and working together to build a stronger, more equitable Chicago region.

“Our hope is that the award provides some level of inspiration to challenge our fellow corporate citizens to think about leveraging the things that they do well day in and day out to make a positive impact in the community,” Escoe said. “It takes all of us, in the manufacturing sector, the service sector, the financial sector, to set an example of being good corporate citizens, ultimately making the Chicago region stronger and more attractive for other employees. That ultimately is a win-win.”

“We are extremely proud of our company’s long history of civic involvement and commitment to giving back,” Santi said. “We wholeheartedly embrace the responsibility that we have to continue to live up to and build on that legacy.”

Join partners like ITW in building a stronger, more equitable Chicago region. Learn about upcoming opportunities for you to make a difference through United Way.