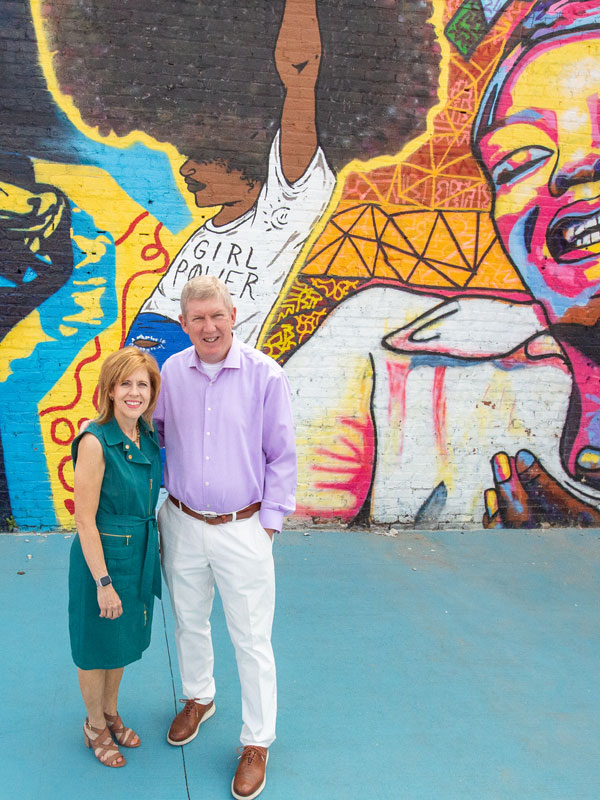 Lisa and Lamar Johnson, co-founders of Lamar Johnson Collaborative (LJC), a mission-driven architecture firm, are leaving their mark across the city. From skyscrapers in the Loop to community centers in disinvested neighborhoods, the Johnsons are shaping a workforce culture that puts human service at the forefront of their business.

United Way has been on Lisa Johnson’s radar since she worked at Wells Fargo in Colorado years ago. As an up-and-coming manager, she was part of a culture committed to supporting those who were not offered the same opportunities. She felt United Way best understood the needs of the communities it served and began donating. When she and Lamar moved from Colorado to Chicago, they got in touch with the local United Way.

The couple settled in Oak Park and began developing relationships in the surrounding community. Austin caught their attention, in part because of its proximity to Oak Park. In 2017, LJC was formed, and the Johnsons asked Sean Garrett to help them identify organizations to support in the neighborhood. Sean connected them with Darnell Shields, CEO of Austin Coming Together (ACT). Lisa had previously met and worked with Darnell through her role at Wells Fargo in Chicago when the bank supported Austin through United Way. She was impressed with the work he and his team were leading and looked forward to reconnecting through LJC. It was clear from the first conversation between Darnell, Lisa and Lamar that the three aligned around the values of community. Soon after initial meeting, Darnell led the LJC staff on a tour of Austin and an impactful partnership was formed.

Lisa and Lamar have built a culture of philanthropy at LJC, putting service and community at the center of their business. Their commitment to community is highlighted through their work in Austin. LJC began working with ACT on a pro-bono basis to develop a plan for repurposing the vacant Emmet Elementary School to Austin’s Aspire Center for Workforce Innovation. The renovations will restore the existing classrooms to functional spaces that meet current workforce development and training needs—from advanced manufacturing to small business incubation.

“Philanthropy is easy, service is more difficult,” Lamar said. “Everyone has the same amount of hours in the day. That’s where the rubber hits the road. What civic and community organizations need is time. They need your contribution and involvement.”

Both Johnsons have displayed this, not only in their work in the Austin community, but also at United Way. Lisa sits on the board and serves as a vice-chair on the Campaign Cabinet. Lamar has coordinated projects like the Aspire Center, where United Way supports the efforts of one of its Neighborhood Networks. He has also sent LJC employees through United Way’s Board Leadership Institute and donated generously to the cause. Lisa and Lamar recognize it’s going to take patience and perseverance to truly reimagine neighborhoods like Austin but that’s a challenge they’re willing to take on—while bringing others along to join them.

“We can change the environment so that people have different kinds of lives to aspire to,” Lisa said. “That will begin to make a difference in those communities. We don’t know what all of the answers are, but we have to try to figure it out.”