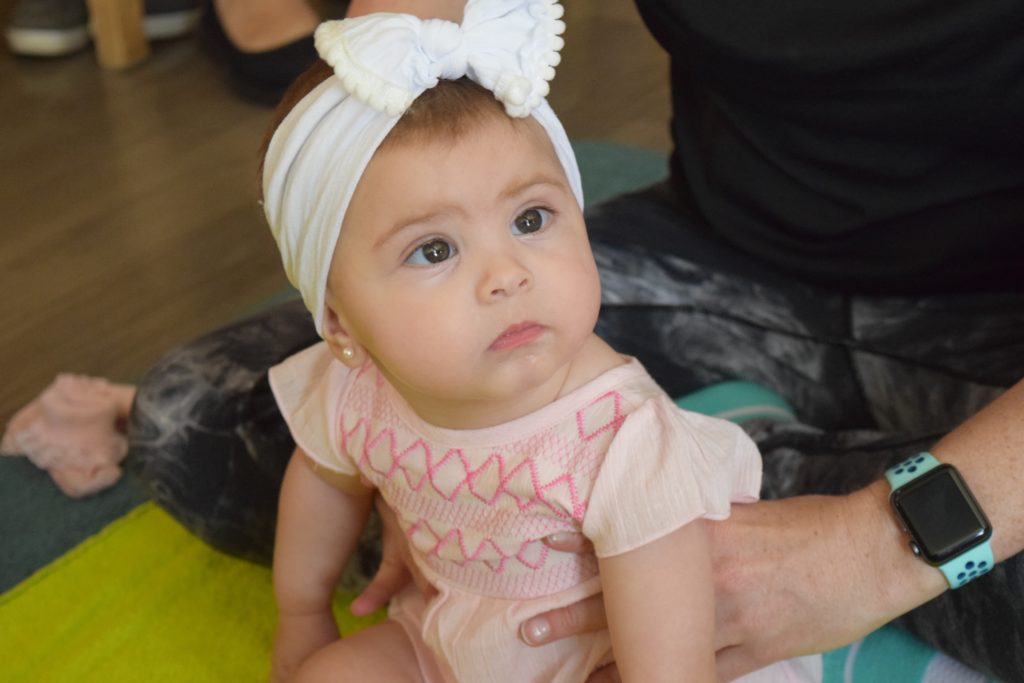 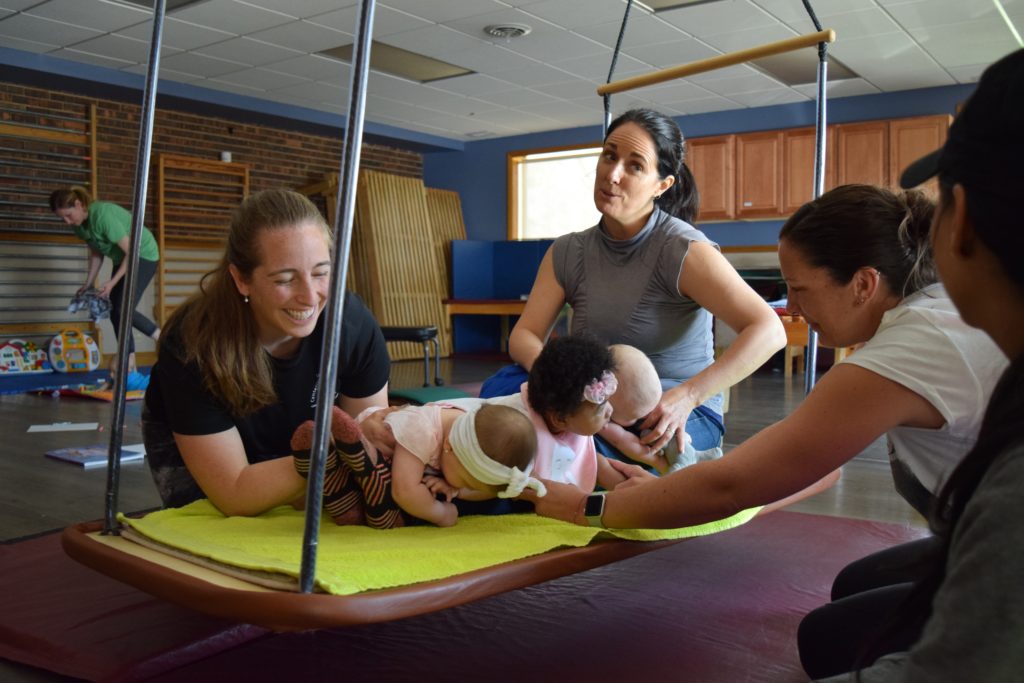 “She’s doing it! She’s doing it!” exclaimed Nicole Zwiercan with a delighted grin on her face. Next to Nicole lay her 8-month old daughter, Ashlynn, holding her chest and head up to see her proud mother.

For every mom, witnessing a milestone in her child’s development is cause for celebration.

However, these advances are especially significant for Nicole and other mothers whose children attend the Center for Independence through Conductive Education, a United Way of Metro Chicago community partner.

The center serves children and teenagers with physical disabilities and delays in development. Its team of occupational therapists, physical therapists and Conductive Education teachers work with the minors to improve their motor and self-care skills in order to lead independent lives.

Ashlynn is one of three children in the center’s Itty-Bitty Babies program, which serves babies who were born premature and/or spent time in the NICU after their birth.

“We know from evidence-based practice that this early intervention gives us the most chance to have the best outcomes,” said Jennifer Fliegel, an occupational therapist and program manager of the Itty-Bitty-Babies program. “It’s been emotional… It’s hard to push a baby, which is what we sort of have to do with strengthening, tone management, positioning and good alignment, so these kids can actually move and be more independent.”

On a balmy, late April afternoon, Ashlynn and her classmates, Aubrey and Max, started their class with a lavender lotion massage before moving through their therapy routine. It involved stretching and strengthening activities and techniques to improve posture and upper limb function, among other skills.

Since joining the class three months ago, Ashlynn, who was born premature and diagnosed with brain damage and later cerebral palsy, has begun to unclench her fists, grab toys and better control her head and neck. She’s on her way to sitting up solo, too.

Brittany Robinson, Aubrey’s mom, has also seen advancements in her 9-month-old’s flexibility and strength since she began the class in March. She was also diagnosed with cerebral palsy.

“I can see a change in her,” said Brittany. “She can tolerate things more. When we first started bringing her, she would cry from discomfort.”

Next, she would like to see Aubrey learn to roll over and attempt to crawl.

Throughout their one-hour class, the babies’ triumphs were met with praise and smiles from the gallery of gawking mothers and family members encircling them.

And though the class is geared toward the baby’s success, it’s hard to ignore the impact the program has on the mothers in the room. Between singing encouraging songs and shaking maracas, they cheer on each other’s babies and confide in one another about their common struggles. 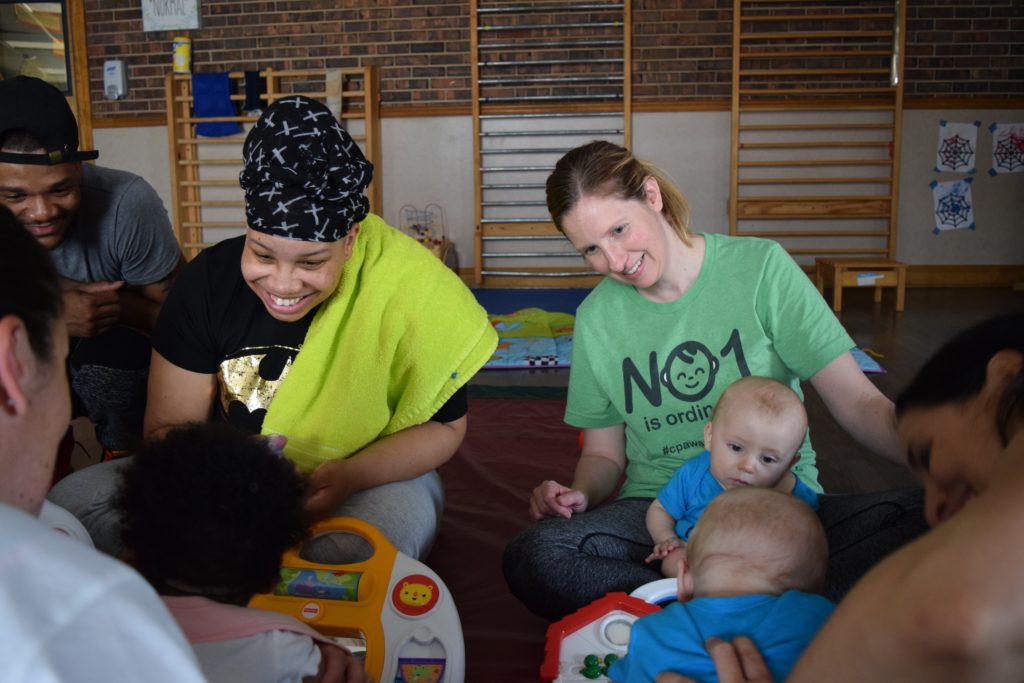 That’s one of the center’s main goals, according to Jennifer. “It’s an intimate experience. They’re all sharing their birth stories, they’re talking about resources. [The class] has that peer-driven learning piece, but it’s also got that parental-support piece, which is really a unique thing that we’re able to provide,” Jennifer said.

As a United Way community partner, the center receives financial support thanks to the tremendous giving of our corporate and individual donors. Those contributions help open the doors of CFICE to some of the most at-risk children in the Chicago region, said Patti Herbst, the center’s director and a mother of an active, hard-working son who thrives with cerebral palsy.

“Kids with cerebral palsy are happy, engaged, curious, and full of joy – just like their able-bodied peers. Unfortunately though, so many children with physical disabilities struggle to receive the services they need to grow up healthy and independent,” Patti said. “Having a child with a disability can be difficult at times – but struggling to access medically necessary therapy can be devastating.”

“United Way of Metro Chicago helps ensure children with physical disabilities learn the skills they need to succeed and empowers their parents to dream big,” Patti concluded. “Thank you United Way, for helping so many incredible children achieve their truest potential!”

Donate today to help fund our community partners, like CFICE, who work to ensure that every child in Chicago receives the educational resources and support services needed to lead a healthy, fulfilling life.