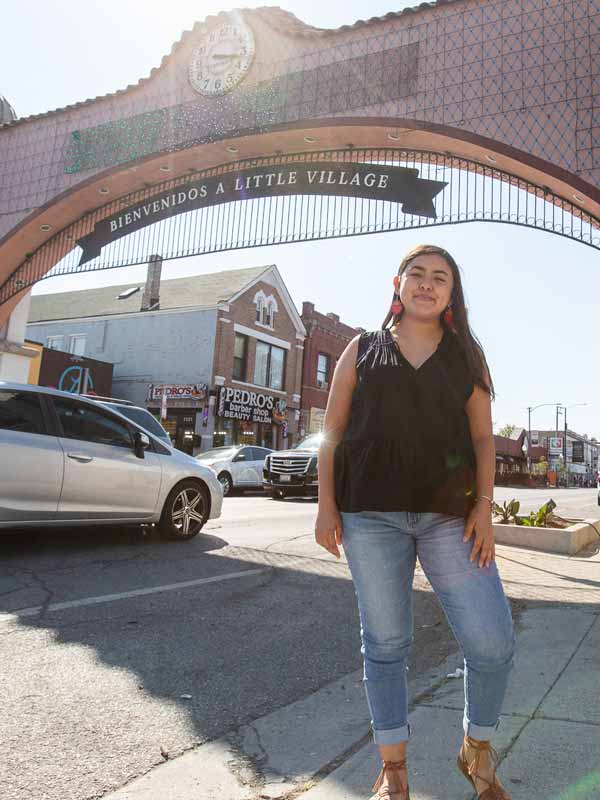 Esmeralda Gonzalez has a vision that one day when you Google search Little Village, the results are not shrouded by negativity or news of violence but instead are filled with stories that celebrate the community’s rich Latinx heritage and culture. This unwavering vision will be achieved when the community listens to, lifts up and fights for the next generation of youth in order to unify Lawndale.

That’s why Esmeralda joined our Neighborhood Network partner Latinos Progresando as a Peace Initiatives Coordinator and became involved with the Marshall Square Resource Network (MSRN) Peace Committee. MSRN is a coalition of 45 community-based organizations that advances bold, integrative solutions with four committees: Peace, Health, Education and Community Response. The Peace Committee works to shape their neighborhood culture towards peaceful understanding and resolution. The committee does this by facilitating peace-building conversations in North and South Lawndale.

Little Village and Marshall Square are jointly known as South Lawndale, a hub for Mexican immigrants dating back to the 1970s, while North Lawndale has been home to Black residents. While their areas face similar struggles, there has been years-long division based on racial and ethnic differences. MSRN hopes to bridge this gap.

“At the end of the day, we all have the same struggles,” Esmeralda said. “It’s about fighting for resources and funding, that’s something both sides of Lawndale have in common. So it’s about building unity and fighting for that funding together.”

And then, on March 29th, a national spotlight fell on Chicago’s Little Village neighborhood when a police officer fatally shot 13-year-old Adam Toledo. Esmeralda and volunteer-led organization Increase The Peace sprang into action, organizing a community-wide peace march dubbed “Peace Walk With Adam.” Over 1,000 people came to celebrate his memory, marching with flowers which they laid on the sidewalk where he was killed. A youth-led Mariachi band serenaded Adam’s family members under the Little Village entrance arch. Latinos Progresando donated banners for the event and made a statement in solidarity.

“It’s sad to say, but Adam’s incident was a wakeup call to a lot of community organizations,” Esmeralda said. “Because this is a whole society that let him down. It’s the society that didn’t help, question or consult him when he was in trouble.”

This community-wide reckoning took a toll on everyone, Esmeralda said. All of Lawndale faced the truth that Adam Toledo represents so many other young people who could be their neighbor, their classmate, their relative. It also magnified the clear need for initiatives like the Peace Committee that help create space for the facilitation of preventative, community-led responses to public safety.

In August, the Peace Committee of the Marshall Square Resource Network partnered with the North Lawndale Community Coordinating Council to hold a Lawndale Peace Party in Douglass Park, a public area located in the middle of the two Lawndales. By acknowledging and confronting the tensions between the neighborhoods, the Peace Committee’s event is working to build solidarity and reach across the avenue to meet the core needs of all of Lawndale.

“This is exactly the reason for the focus on our community’s youth, and the reason for all our youth programs,” Esmeralda said. “Everyone wants to find as many resources as they can for our youth and have those resources available, so no one slips through the cracks.”

The peace-building work across Lawndale continues with the community’s annual Peace March and resource fair in October. Esmeralda and Latinos Progresando’s work confronts harmful misconceptions about Little Village by magnifying and building on all of the good in the neighborhood, making it known that they are stronger when they band together.