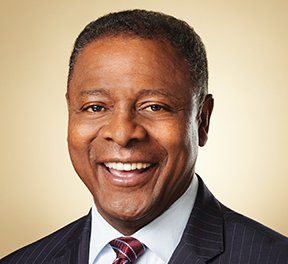 This story was written in January 2019. Since, Charles Matthews has been named United Way of Metro Chicago’s 2020-2021 Campaign Chair!

In his lifetime, Charles Matthews’ career has taken him and his family around the United States and beyond. Though his title and coordinates have changed, his commitment to serving as a philanthropic leader in the workplace hasn’t.

Serving as president and chief executive officer of Peoples Gas, Charles oversees the daily operations, strategy, growth and administrative activities of the two utilities that distribute to more than 1 million residents across the Chicago region.

Since he took the helm in 2015, Charles has served with a sense of personal and corporate responsibility at the forefront of his mind. A member of United Way’s Tocqueville Society, a global membership organization of community leaders and philanthropists, Charles embodies Alexis de Tocqueville’s belief that in order to create a vibrant civil society, people must join forces for mutual purpose.

In his case, Charles utilizes his leadership position to cultivate a culture of corporate philanthropy that advances solutions to Chicago residents’ most pressing problems.

“I have been committed to United Way my entire career,” Charles said. “I’ve been fortunate that every step of the way, I and my corporations have been involved with a United Way. It’s part of my corporate DNA.”

A native of Macon, Georgia, Charles has had a wildly successful career in the energy and utility industry. Earning degrees from Talladega College, Atlanta University and the University of Pennsylvania, Charles ventured into the industry in the early 1980s.

Since, he’s worked and resided in New Orleans, Jamaica and Wisconsin, where he served on the board of United Way of Greater Milwaukee & Waukesha County. Four years ago, he uprooted and settled down in the Windy City to run Peoples Gas and North Shore Gas.

Among other internal enhancements, Charles quickly urged his new team at Peoples Gas to amplify their culture of giving, especially to United Way.

“If you look at the breadth of the organization – the programs in education, income and health – those are the things we [at Peoples Gas] have an interest in and need to support in order to improve the neighborhoods that we serve and where our customers live,” Charles said.

“United Way also makes giving an efficient process for us,” he added. “We don’t have to go out and find those different partner agencies. We can rely on its depth of experience and history of supporting the best of the best of those organizations.”

To demonstrate his dedication to corporate philanthropy, he set the stakes high. “I knew that we needed to do something with a splash,” Charles said of his charge to employees. “The splash was we were not in the Top 25 contributors to United Way. So, the goal for year one was to get in the Top 25.”

Under his leadership, Peoples Gas employees reached, and even surpassed, that milestone! By challenging employees to give at a leadership level, at least $1,000 annually, his team nearly doubled its corporate contribution to United Way of Metro Chicago between 2015 and 2018.

In his few years in Chicago, a place where he loves to see Broadway plays and explore new restaurants, Charles has made a commitment to the city that extends beyond his office. He’s dedicated to helping shape the Windy City into a place where all can live safe, healthy lives.

That’s evident in his support of United Way and his service as a board member of the Chicago Urban League, Navy Pier and Ounce of Prevention Fund.

And though there is still much work to be done, Charles is encouraged by the strides United Way of Metro Chicago and our partner agencies are making across the region, especially in our Little Village Neighborhood Network, where Peoples Gas has greatly invested both money and new company infrastructure.

“I look at the news every day, and those challenges exist more today than before. Or it’s just as prevalent today as in the past,” Charles said of violence and education, income and health inequalities. “But, as I look out and see the alternatives, the options to help us try to achieve some success in those areas, United Way is still the one that stands at the top.”

Deepen your commitment to United Way of Metro Chicago by joining an affinity group, giving society or regional board. Learn how you can get involved!